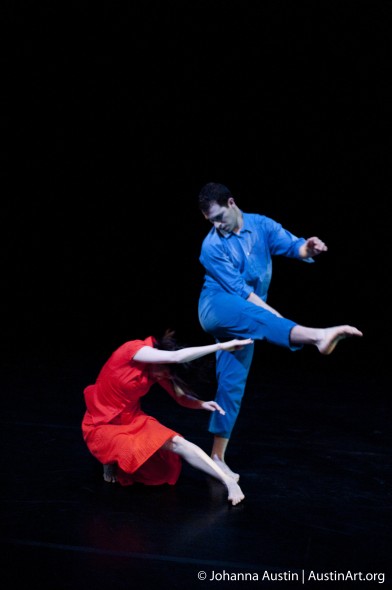 Two very different persons decide to walk away from each other. One wears a female-colored body, the other wears a male-colored body. After their lives’ long journey, they collide on the other side of hemisphere, ready to confront, share, converse with each other. The work doesn’t necessarily seek to create a narrative story, but AURORAS intends to deliver its beauty, absurdity and buoyancy which become appreciative through two visceral characters brought to stage along with the uniquely intensified contrasting colors, as seen in Northern sky lights. AURORAS delves into a world of “Saturation”. A saturated world will be explored through the contrasts of colors, theatrical exaggeration, jolt of invented movement and gender specified costumes in a non-gender defined space. The colors of AURORAS are inspired by dramatic Northern polar lights, which illuminate the northern horizon as a greenish glow or sometimes a faint red, as if the sun were rising from an unusual direction.

Definition of “auroras”
n. pl.: A luminous atmospheric phenomenon appearing as streamers or bands of light sometimes visible in the night sky in northern or southern regions of the earth. It is thought to be caused by charged particles from the sun entering the earth’s magnetic field and stimulating molecules in the atmosphere.

Definition of “saturate”
1 : to satisfy fully
2 : to treat, furnish, or charge with something to the point where no more can be absorbed, dissolved, or retained
3 a : to fill completely with something that permeates or pervades b : to load to capacity
4 : to cause to combine until there is no further tendency to combine