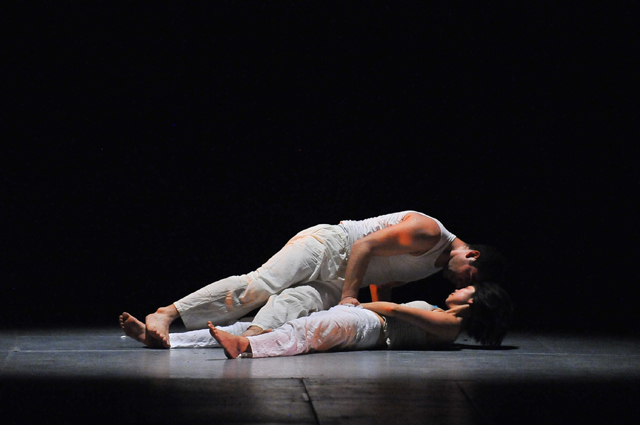 getting UP is divided into two main sections. The First, which is danced in silence, begins slowly and ritualistically but quickly advances to a swift confrontation in which one dancer continuously forces the other to the ground in a myriad of ways. As the dance develops, the aggressor becomes less capable of restraining the other. The dancing eventually gathers so much momentum that the two dancers nd themselves locked in a vicious yet ridiculous cycle of sexually charged actions. The aggressor then loses her energy and collapses on top of her opponent. The song, “Je N’en Connais Pas la Fin” begins to play as the limp dancer is lovingly folded and tucked into many evocative forms. The singer croons about the happy memories he has of going to a park and riding a ferris wheel and the dancer engages in futile attempts to connect with his inanimate partner. In the final moment there is a surprise.
Premiere: @Teatro Mérida, Festival Internacional de Danza Avant Garde