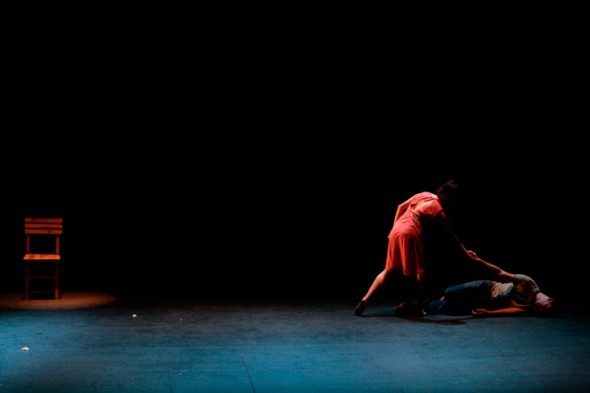 The piece is an exploration of two people struggling to find their identity within the parameters of their relationship. It is heartfelt and sad; the movements reveal a relationship and the layers that are felt but cannot be expressed in words. There is a lone chair upstage that never gets used but reminds us that someone is watching over our actions. The work was made possible, in part, with funding from FONCA (National Foundation of Culture and Arts, Mexico).

“… danced with passion…invisibly connected as they double their movements in separate space, then dynamically linked as they come together”
Tom Phillips, danceviewtimes

“such fine awareness of each other, the space, and focus that one would almost think they were 2 in the same.”
“Moving togheter and apart the duet generates an even keeled flow of movement and gestures than propel one into an intrinsic melody that doesn’t come from the music.”
Brian H Buck, www.bhbuck2.org